Blast From The Past: Ron Geesin

Off we go with another BFTP. Normally we go backwards, but today we're going sideways first, then so far back that we end up in motherfudging Narnia.

Those of you of a certain age (like thegeneral) will remember the privilege of watching school's programmes on TV as part of the curriculum. You'd all be ushered into the hall, seventeen big lads and a wheelbarrow would haul the Ferguson TV in (and the Videostar if you were lucky) and you'd all be transfixed by watching something educational, on a screen that was bigger than a giant's undercrackers. This was before the age of interactive whiteboards and no discipline, by the way. Some of you may be familiar with this type of thing:


This unusual electronic music that seemed to be so beloved of every school's programme of the 80s was composed by Ron Geesin - and he's the subject of this BTFP.

You may actually not be very familiar with Ron, but you've probably heard more of him than you think - especially if you are a Pink Floyd fan, for it was Ron who made a heavy contribution to the group's fifth album "Atom Heart Mother".

It isn't a massively easy listen, I'll admit. But y'know, fill your boots with the link.

It's virtually impossible to describe Ron's style without inserting the words "he's fucking crazy" at some point in a sentence. So anyway, he's fucking crazy and he's done so much over the course of his career and still remained relatively unknown. An absolute synth/electronica pioneer to be quite frank but one who never gets the recognition he deserves. Sometimes, he's like a Glaswegian Vivian Stanshall, shouting, babbling and spouting into the mic. Other times he's the most assured pianist and keyboard player. Sometimes, he's just quirky. There is this wee gem...

...called Ambling Antics. It's not available to download anywhere, but it's two minutes of unbridled joy. Once you hear it, it gets lodged in your brain and you can't shift it. It's probably one of his most accessible pieces in all honesty, but it's one every electronica fan should try and get to know.

Anyone who has read this and thought, "Yeah, I'll give him a go" should hie themselves over to either Spotify or Cherry Red Records and make a purchase thereof of his 1994 album "Hystery". It's a delightful overview of quite a lot of his work and should help you make your mind up whether you love or loathe him (hopefully love, but thegeneral cannot promise...). Ron is 70 this year and still top notch. Give him a go.
Posted by thegeneral at 10:45 No comments:

Fatherson - Mine For Me 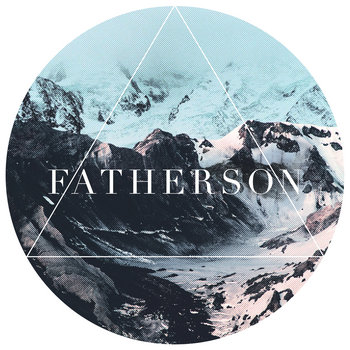 Well, a very happy Saturday to you all, gentle readers. (Are you all gentle? I suspect not. Especially not YOU). Today, I'd like to rather belatedly make a case for this new single from the rather delightful band Fatherson, who have only just come into thegeneral's consciousness, despite being around for a short while now and producing a rather wonderful EP bundle, which you can listen to and buy from their Bandcamp page: fathersonuk.bandcamp.com/album/fatherson-ep-bundle  (the advice seems to be buy this now as the band will take it offline quite shortly).

Aside from this, the guys are preparing to release their debut album towards the end of this year and in preparation for this, earlier in August they put out a new single entitled "Mine For Me". Please to be having a click on the YouTube link to listen.

Pretty sure you'll agree they've a great sound, the feel of their songs suggests they are older than they actually are. That's not meant to sound like a patronising load of flim-flam - thegeneral is no spring chicken, you see. Anyone under the age of 30 is a wee young naughty scamp. "Mine For Me" is a really accomplished number, only taking one or two listens to get under your skin and infectiously stuck in your brain. So, give them a go. Yes.
Posted by thegeneral at 09:42 No comments:

The Lonely Together - A Million Summers 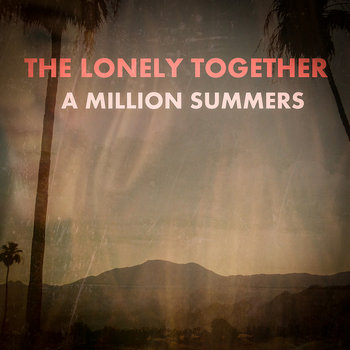 Released today. The Lonely Together's new single "A Million Summers" has been a little while in the making but worth it. Before we go any further here is the link to their bandcamp page so you can go have a little listen:

You know what these guys do nicely? Wistful, romantic sounds that speak to the listener of heartbreak or lost love. Their songs are full of pathos. It's what thegeneral refers to periodically as 'rainy window music'. Which, is ironic, given the title of this particular song. Anyway, give this a listen. It's a wonderful follow up to "Be Strong Frances" (another beautifully wispy wishful track).

Finally, if you want to watch the video that accompanies the new song, you can do so by clicking the YouTube link above.

I like these guys, I hope they have a good future.

Posted by thegeneral at 10:39 No comments: 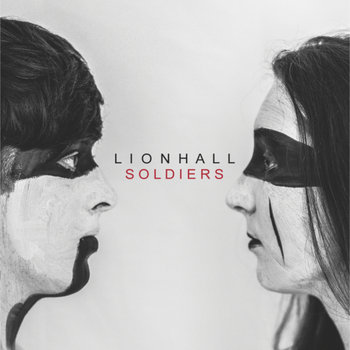 Another pretty exciting record label to look to is Tiny Lights Recordings (tagline DIY as Fuck). They've had some great releases over recent times and probably thegeneral's favourite so far this year - the mighty TUSK's Interrobang EP (yes, yes I know - I keep mentioning TUSK, but they really are one of my tips for great things)

However, this new record from Lionhall, called 'Soldiers' is similarly exciting. It's released on 28th August and I'd really like to recommend that you give it a listen. A catchy, catchy opening hook is married with beautifully tempered, ethereal vocals that seep into your consciousness without you realising. It's an achingly sweet sound than has an unexpected power to it. It takes more than one listen to fully understand its depth, but once you do - you're enraptured.

Have a look at the band's bandcamp page below. They've a lot to offer and it won't be the last you hear of them.

tinylights.bandcamp.com/album/soldiers
Posted by thegeneral at 10:33 No comments:

Blast From The Past: Mike Oldfield

At thegeneral, we believe that music snobbery is quite a bad thing. If you like something, love it, listen to it with pride and don't feel guilty (unless it's Justin Bieber, in which case hang your fucking head in shame). It's the mission of this blog to try and be as open as possible to all different kinds of sounds.

With this in mind, today we're taking a trip back and having a Blast From The Past episode. The previous BFTP we featured some time ago was the wonderful, scuzzy Leeds indie-pop act CUD (recently reformed and still touring, the gorgeous bastards). Today, it's the turn of Tubular Bells hero and all round guitar genius, Mike Oldfield.

Over the last few years, Mike has been remastering and re-releasing many of his early albums. This September sees the remastered and Deluxe versions of Five Miles Out and Crises take their turn.

Crises I'll skim over - it wasn't really my favourite - though the title track has its merits. However, Five Miles Out was a very good record indeed. If you don't believe me, have a listen ^clicketh ye the linky above^.

I have reservations about the remastered works. With the Tubular Bells Deluxe Remaster there was a lot of new material, demos that hadn't seen the light of day since the 1970s and they were wonderful to hear. The same goes for the Deluxe Remasters of Hergest Ridge, Ommadawn and Incantations - all contained material that was really worth a listen and (if you're a serious Oldfield nut, like what thegeneral is...) versions of tracks that definitely needed geeking over. However, then came the new editions of Platinum and QE2 - and they started to..well...wear a bit thin...

Looking at the track listings for the new Remastered versions of Five Miles Out here and Crises here there really isn't that much to tempt. Just a couple of new tracks and not much else. thegeneral has previewed them on the old iTunes and can report that yes, they sound nice and you can tell some tinkering has gone on, but really these may only be for the very serious Oldfield completists. Jungle Gardenia on Crises, is a good track though and has a nice, typical Oldfield style. thegeneral also hopes that one day he sees fit to put a remastered version of The Path on one of his next releases as that is genuinely one of the most spooky and haunting tracks that never properly saw the light of day. You can listen to that HERE.

Anyway - for those of you who care (and let us not forget, this man gave us TUBULAR FUCKING BELLS FERCHRISSAKES) the release date for both these old new albums is September 2nd. My advice is to go and revisit the Deluxe remasters of TB, Hergest Ridge, Ommadawn and Incantations first though...

Posted by thegeneral at 10:26 No comments: 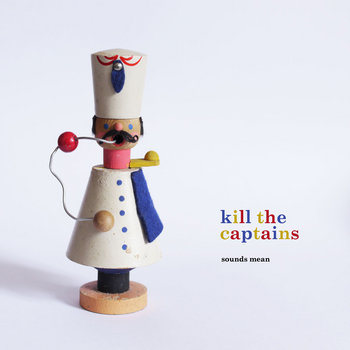 Well, spank my arse and call me Charlie - it's been an awfully long time since thegeneral updated with anything new. I'd try and explain my absence, but to be honest I can't be fucked.

Anyhow, I'm back - with a bang. In terms of new music, there's an awful lot going on at the moment and much to talk about, over the next few posts I'll hopefully try and address some of the great releases from the last few weeks/months whilst introducing as much new/forthcoming stuff as possible.

The first band I'd like to introduce everybody to is Kill The Captains. Yus indeed. Kill The Captains. They're from Sheffield, but don't think you're going to get The Human League or Cabaret Voltaire (nagnagnag), because you aren't. Although you'd be forgiven for thinking so when you play the sample track from their new album, "Sounds Mean" which is up on bandcamp at the moment (link below). "Disco Nazi" is a blistering mix of bass, electronica and distorted vocals which really gets you. The bassline of this was enough to win me over (thegeneral likes a good, dirty bassline...)

Anyway, the album in whole is released on 12th August and is available from bandcamp (I say again, link below) and comes to you courtesy of the wonderful, wonderful Armellodie Records who I adore a lot and am going to be featuring more and more of this year.

Enjoy, you big shower of bastards.

killthecaptains.bandcamp.com/
Posted by thegeneral at 10:02 No comments: