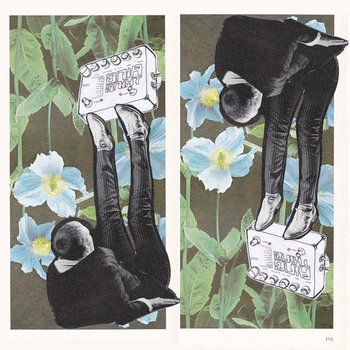 It's been a while dear readers, hasn't it? I know, and I am eternally sorry. Thank you for all the e-mails and letters that didn't flood in, demanding to know where I'd disappeared to. It's nice to feel loved and wanted. By no-one. I could tell you what I've been up to, but I'd have to kill you - and that wouldn't be nice, would it? It might sting a bit.

Anyway, yes, I am back, after another short break and I'm ending my radio silence with an EP that I had sent to me just last week by Mutes. I was mightily impressed with it and wanted to feature them as soon as I could.

So, as I always start these posts - here are the necessaries, hoik your lapels off to the bandcamp page to have a listen to the sneaky pre-release preview track:

Now, I've been lucky enough to have the entire EP to play, not just this track - however, being as that's the song you've all just listened to, I'll start there. Hands up if you were a shoegazer in the 1990s? This should, in the nicest possible way, take you back there. M.P.D.G has such a nice feel to it, spacy, distant, aloof, ever so slightly trippy and muted. It rattles along at a really nice pace, the guitars on it are elemental and rhythmic, and sort of blend in with the slightly hard to discern androgynously ambiguous vocal.

The rest of the tracks mark a slight departure, but are equally as beguiling. "Hope" - the opener, is a paean, a delicate chant, that paves the way into "M.P.D.G". It's ever so slightly haunting in it's simplicity. Then we move into slightly more trippy, ambient territory with "Port Sunlight" and "Phonophobia", again, both haunting tracks that feel as though they could seep into your brain and disturb your sleep. They're sepia toned, blurred at the edges and although they're slightly experimental in nature, they work as a nice contrast between the opening two tracks and the final song of the collection "Smother" which has a nice hook, a wispy vocal and moves back towards shoegazing again.

The tracks all have an ache to them. I know that probably sounds like rather a strange comment to make, but there's a feeling of isolation in them, a sense of everything being slightly off kilter. It's hard to explain until you've played them through a few times and come to understand how they're layered and put together, but that's how it feels. It's the sort of music you'd probably want to listen to if you were needing a bit of head-space and some time alone, to just sit in stillness.

The EP itself is coming out in full on 22nd April, via onenoteforever records - they also look after the mighty Toliesel - who I featured not that long ago on these very pages. I'd highly recommend you take some time out of your day and give Mutes a go. If it's something a little out of the ordinary you want - this new EP should be your go to.

7th May Update - Mutes have officially released M.P.D.G today, so please go to mutesuk.bandcamp.com/ or store.onenoteforever.com/album/mutes to download, like, right now and stuff.

You might also want to check out this performance of "Smother" from the EP, which is beautiful and highly recommended by me.

Posted by thegeneral at 10:33 No comments: