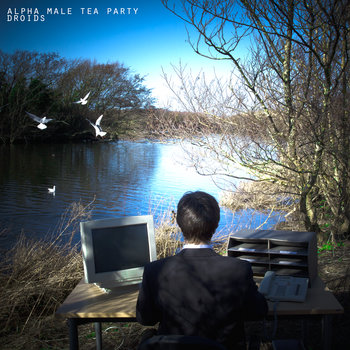 Hello. Happy Tuesday. Have you had the sort of day that requires intravenous crisps? I have. I can't even begin to tell you. You just wouldn't believe me. So you know what I need? I need some music that will basically blast everything into oblivion. You know what's coming next?

I've got it for you.

Alpha Male Tea Party. Oh my absolute cocking gosh. Eagle eyed avid readers (and I still know there's at least one of you, and that you still do have your own teeth - and someone else's too, living on Instant Whip is NO JOKE) will know I've featured them before on these hallowed pages - you can click here to read my review of  Real Ale and Model Rail their release from last year.

Happily they haven't left it too long before they came back and yesterday saw the release of "Droids" their latest album. As always with me, the necessaries - hoik your gussets over to the Superstar Destroyer Records bandcamp page to have a listen and buy it:

I just love these guys. I love them. They make everything better. Whatever ails you, you can guarantee they'll blast it out of your head at twelvety bajillion miles an hour. But what's so good about them is that there is actual real musical depth, there is something going on in there - it isn't just thrashing about - it's post progressive maths rock (and you all know how much I bloody love my maths rock) with a real edge to it. I love that they're not afraid to experiment, that amongst the heavy, riff laden repetition, there's a complexity to the sound the defies logic.

They're a band with real humour too. Tracks like "You Eat Houmous Of Course You Listen To Genesis" are a case in point - as is "Your Happiness Is Stored On A Hard Drive And Is Now Corrupt". They're clever. It's clever wordsmithery to go with clever, well thought out music.

But they're not one trick ponies. They know how to temper their tracks - the last two of the album - the also wonderfully named "God Is Love But Satan Does That Thing You Like With His Tongue" and "I Haven't Had A Lunch Break Since Windows Vista Came Out" are both slow burners - starting off as as a little meanders, but turning into a wide, spacey, open ended brilliance that leave you feeling quite elated.

No matter how shite you're feeling, Alpha Male Tea Party will bring you out of it. Get "Droids" into your collection and give these guys your support. Total and utter brilliance.

Posted by thegeneral at 10:24 No comments: