Blast From The Past - Josef K 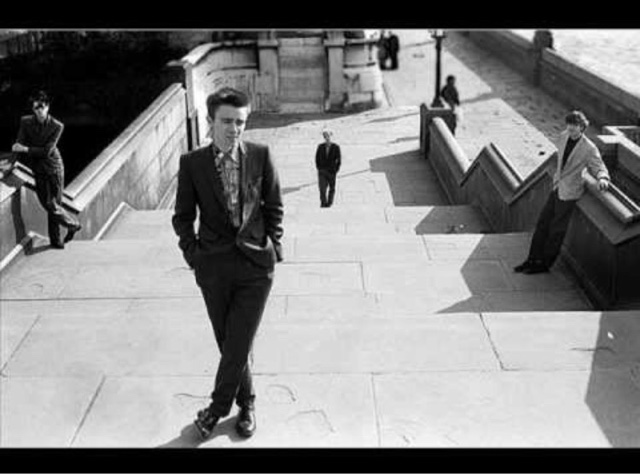 Today you're actually getting two blog posts for the price of one. Which, I think you'll agree, is better than a kick up the arse with an open toed sandal.
I realised that I hadn't done a Blast From The Past post in a long while and of late I've had the pleasure of sort of re-discovering and thoroughly enjoying a brilliant Scottish post-punk band called Josef K.
Reason I say 'sort of' rediscovering is that I'd known about them for a long time, but never really taken the time to listen to them properly - and now I have I could kick myself for missing out on them for so long.
So, who were they?
Well, they were formed in 1979 - and their work featured ostensibly on the DIY label Postcard records, run by the mercurial Alan Horne.
The band consisted of Paul Haig, Malcolm Ross, David Weddell and Ronnie Torrance and although they were only together for three short years, (79 thru 82), releasing one complete album in that time, they've greatly influenced many acts since.
To whet thy whistles, here is the track that got me into them - it's called 'Sorry For Laughing'
https://youtu.be/-VzcWv8qKQw
Isn't that just a big slice of fuckawesome?
I love the sound they make, the lo-fi feel and the interesting juxtaposition between what you hear and what you see. If you took that track in isolation and just listened to it, you'd think they were some moribund bunch of disaffected youths. Then you see them, and their appearance showed a lot more sprightly humour than you'd think.
If you like their label mates Orange Juice (fronted by the sublime Edwyn Collins) then you'll like Josef K. They're sort of the serious older brother, that you find all dark and mysterious - then discover he's a right laugh underneath the cardigan and glasses.
If you liked the previous track, have a listen to 'It's Kinda Funny'
http://youtu.be/XL5C7KVA0jA
This corking track was (I think) written about late Joy Division frontman Ian Curtis. It has that Divisionesque feel to it anyway, the bass at the beginning and the darkness of the vocal particularly reminiscent of him.
That's only two tracks. If you've liked what you've heard, I really recommend buying this anthology - which will introduce you to them some more:
http://www.amazon.co.uk/Entomology-Josef-K/dp/B000I2IRLY
I've had this on a loop all week and can't stop playing it. Totally amazing.
The one album they released 'The Only Fun In Town' is there alongside a lot of shelved recordings - which are all so worth listening to.
OK, so just another short post, but I'd love it if at least one of my readers discovered Josef K and gave them a chance. I'd loved a lot of the Postcard Records stuff for a long time and regret leaving it so long to listen to, and fall in love with these guys. Brilliant stuff.
Posted by thegeneral at 13:59 No comments:

Email ThisBlogThis!Share to TwitterShare to FacebookShare to Pinterest
Labels: blast from the past, fucking excellent, post punk, punk, Scottish pop

It's been a long time, dear reader (s). Well over a month. Tempus, as they say, doth verily fugit. I mentioned that I might not be blogging as much and that has sadly come true. I'm hoping I might be back more in the new year, but for now posts will still be sporadic.

However, I am back today for a few short moments to let you know that one of my favourite acts from earlier in the year Leeds/London based Apollo Junction are back with a brand new song - and I really felt you all ought to know about it.

First of all, here's my post on them from earlier in the year: here


And if ye clicketh the linky above, you'll be lucky enough to listen to/watch the new self made video for their new track 'Born For Now' - they're quite fit, you know :D

I wanted to give this a feature as it is a PERFECT slice of electro-indie pop and listening to it has really given an otherwise exceptionally dreary afternoon a lift. It's got a brilliant vibe to it - a real anthemic feel, that gives you a buzz, and believe me, I really need one right now.

I really rate these guys a lot - and it seems I'm not the only one, BBC Radio 2's Janice Long has played this ruddy brilliant track 6 times, and not just because the needle was stuck on the gramaphone either!

You'll be able to preorder from iTunes here: itunes.apple.com/us/album/born-for-now-single/ and I highly suggest you do.

If your Autumn playlist has got decidedly dull and grey - then get this. You will not regret it!

Posted by thegeneral at 07:48 No comments: