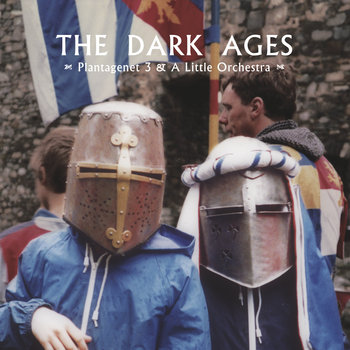 "In days of old when Knights were bold and ladies weren't invented, the Knights drilled holes in telegraph poles and they had to be contented" So wrote an ancient chronicler of the time. Possibly. They used all big words back then, didn't they? Like "wheelbarrow" and "chopping block".

Welcome to a brand spanking new post for ye olde Tuesday night. Tonight we're going back in time, to a place where women like me would have been flogged to death and lightly roasted for daring to even think about starting a blog. That's right, it's 1987.

I'm here to introduce you to something rather utterly fabulous from the wonderfully named Plantagenet 3. Now, being something of a total history nut, when the band contacted me, they could have told me they only played Bonnie Tyler covers on Shawms and I would have been sold. Just their name alone had me rapt. However, they do so much more than that (though guys, if I find that's what you've done for your next release, I want a cut of the royalties...)

Right, to get serious. I was so pleased when they contacted me and asked me to review their new single. First of all, the necessaries. Go to their bandcamp page and have a listen:

Now cometh ye back over here.

Isn't that just a total joy? The new single is called "The Dark Ages" and is a wonderful mash up of styles and themes. It's part Western, it's part film soundtrack, it's like what Dick Dale might have been like if he hadn't been like Dick Dale. It's everything. It's got a sixties feel, but it sounds modern, it's got ethereal strings and a catchy, chirpy melody that draws you in - the guitar sounds are incredibly pure. It's something totally different, really. The first track "Canute (The Irresistible Surf)" is a perfect piece of instrumental gorgeousity. In fact, I reckon if Canute was around now, he'd have forgotten about the tide, kicked his throne out the way and had a good bop to this instead.

The second track "Godiva and Tom" is something that starts of gently, lulling and insistent - but that turns into something quite beautifully melodic and entrancing. It has slightly more of a distorted edge than the opener, which makes it feel quite different in tone, but it's no less wonderful.

You can also stream the single in full on soundcloud here:

I recommend you give Plantagenet 3 a listen and lend them your support. We need more original, fabulous music like this.